The history of Montfort l’Amaury began as far back as the Xth century when Robert le Pieux, the son of Hugues Capet who was the French King, was given the earldom of Iveline. Then, he took up residence in the castle of Saint-Léger and decided to build two strongholds: one near Epernon and the second in Montfort L’ Amaury, on the 185 metre high hill which overlooked the Roman way running from Beauvais to Chartres also called “Montfortis”.

William of Hainault was asked to fortify it in order to defend the kingdom against the Norman invasions. His son, Amaury I (1020-1060), succeeded him and his son-in-law Hugues Bardoul was appointed Captain of the castle.

The castle, then, looked like an irregular octagonal keep approximately 20m wide with walls about 2m50 to 3m thick.

Amaury was the one who planned to build the first stone ramparts around the village he finally gave his name to. He also built the Saint-Laurent Chapel.

In the XIVth century, when Yolande of Dreux, Countess of Montfort (1312-1320) married Arthur II of Brittany, the earldom became the property of the crown of Armorica. Thus, from then on, the eldest son of the Duke of Brittany used the title of Count of Montfort. As a consequence, the village became Breton for two centuries.

Anne of Brittany was the one who built the castle and the tower that bears her name and which is in the Flamboyant Gothic style, as relic of the distant past. 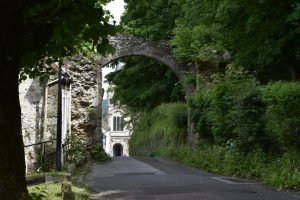 Listed as a historic monument. It’s named on account of the Captain who built the fortification of Montfort in the XIe century.