The “Château de Groussay” was built in 1815 by the Duchess of Charost who was the daughter of Madame de Tourzel and the governess of the children of King Louis XVI and Marie-Antoinette.

The great art collector Charles de Beistegui bought the castle in 1938 and in 1952, two wings were added in order to extend it. He ordered the construction of a library and that of a fabulous theatre which is still used today. He covered the walls of one of the galleries with large tapestries especially woven for Groussay and inspired by Goya’s cartoons kept in The Prado Museum in Madrid.

Anxious to satisfy all his desires and to allow himself anything in terms of creativity, from China to Venice and from Egypt to Ancient Rome via Turkey, Charles de Beistegui created this 10-hectare entrancing park with the kind help of his artist friends Emilio Terry and Alexandre Serebriakoff. Thus, as soon as 1949, about ten “follies” were designed to beautify the park.

Charles de Beistegui made alterations to the castle and created follies untill his death in January 1970.

In 1993, the whole property is listed as a historical monument. 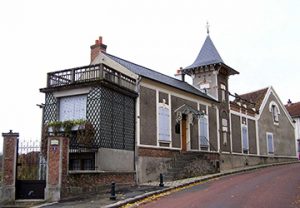 Seduced by the peace and quiet of Montfort L’ Amaury, Maurice Ravel took up residence in Le Belvédère in 1921.